What is UVC light?

UVC light is a type of ultraviolet (or UV) light. Most of the UV light we experience is from the sun, and it is invisible to human eyes. Find out more...

UVC is a type of ultraviolet (or UV) light. Most of the UV light we experience is from the sun, and it is invisible to human eyes. It constitutes about 10% of sunlight. The other 90% is formed of visible light and infrared light.

All light can be measured on a spectrum of different wavelengths, as shown below. UV light is light with shorter wavelengths, which is why it’s positioned on the far left of the spectrum. Visible light and infrared light’s wavelengths are longer.

Sunlight contains three types of UV light - UVA, UVB and UVC. All of the light which reaches us via the sun is either UVA or UVB. UVC light is filtered out, in part by the ozone layer, before it reaches us - which is fortunate, because its distinct properties would make it dangerous to us otherwise. 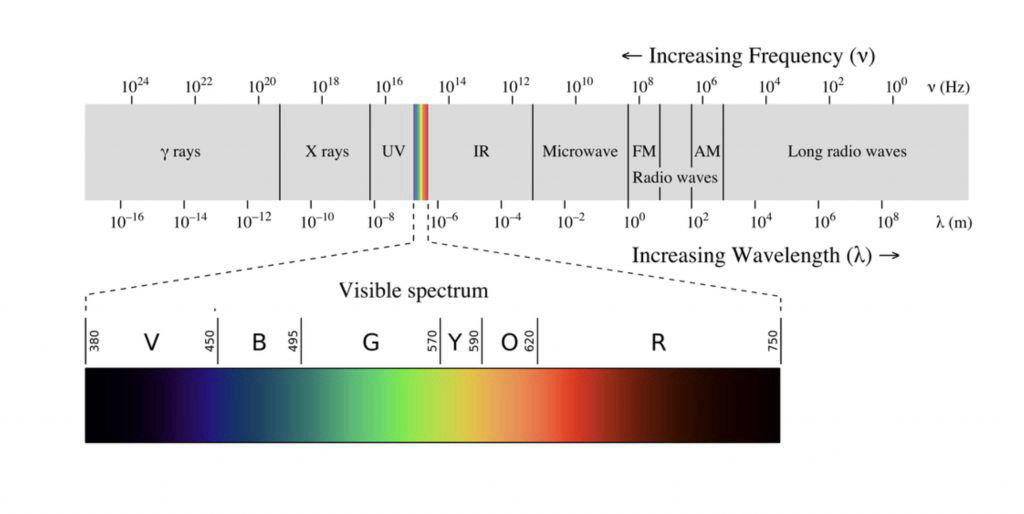 What does UVC light do, and how is it different to UVA and UVB light?

The most obvious visible effects of the UVA and UVB light that we encounter from the sun are sunburns and suntans. UVA radiation is thought to be responsible for up to 80% of skin aging - while UVB is the form which causes the body to produce Vitamin D, but can eventually cause skin cancer (melanoma) in cases of overexposure.

In other words, both have a significant effect on living tissue. But UVC light is even more powerful. This especially short wavelength of UV light is highly effective at actively destroying genetic material. A sunburn which would take hours via UVB would take just seconds via an equivalent exposure to UVC. It’s this property that makes it a powerful tool for disinfection.

What do we use UVC light for?

While UVA and UVB light are harnessed for a variety of purposes, from tanning beds to blacklights, UVC light’s properties make it extremely useful for disinfection purposes.

This is because its ability to destroy genetic material is not limited to larger organisms like humans, but is also highly effective against simple organisms such as viruses and bacteria.

Plus, unlike chemical based disinfection, it doesn’t harm surfaces or leave residue - and with the right equipment correctly deployed, it can be quicker and much more comprehensive.

You can find out more about how and why UVC light is used for disinfection here.

UV light occupies the 100 nanometre (nm) to 400nm range of the electromagnetic spectrum. It is categorised into the following types dependent on wavelength:

Far UV (only propagated within a vacuum)

UVC (extremely destructive to genetic material, used for disinfection of rooms and objects)

UVB (can cause skin cancer in humans, used in some medical applications)

UVA (responsible for the majority of skin aging in humans, used in applications including some medical treatments, sensing, printing and lithography)

In order to make use of UV light, artificial sources are usually used. Most artificial UV light sources do so by passing an electric current through vaporised mercury or another gas.

For simpler purposes, such as blacklights, relatively simple methods are employed to control the wavelength of the emitted light - relying primarily on the use of a phosphor which emits UVA instead of visible light, paired with an optical coating which blocks light above 400nm.

In the case of UVC, more powerful and specialised equipment is required to ensure that the correct wavelength is emitted safely and reliably. Because ordinary glass absorbs UVC, UVC emitters must employ a fluorescent tube made of a different material - often fused quartz or vycor. This also has the effect of blocking UV light which is outside of the desired UVC spectrum.

To find out more about THOR UVC® and HYPERION® for your facility, please email our international sales team or call us on: